According to Arabic legend, opals were believed to contain lightning. 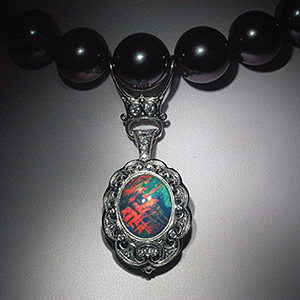 Opals are a wonder of nature. Writers through the ages have compared opal colors to volcanoes, galaxies and fireworks. Admirers gave extraordinary opals poetic names like Pandora, Light of the World and Empress. In Ancient Rome, this gem symbolized love and hope, and they called it opalus or “precious stone.” Many cultures have credited opals with supernatural origins and powers. The ancient Greeks called them opallios and believed opals gave their owners the gift of prophecy and guarded them from disease. Europeans have long considered the gem a symbol of hope, purity and truth.

The phenomenal nature of opals has brought enjoyment to many, but it has also evoked unwarranted superstitions. For example, in 1829, the novel Anne of Gerstein by Sir Walter Scott attributed “enchanted powers” to an opal, and some readers mistakenly began to think of it as an unlucky gem. The market for opals crashed and prices were down 50%. But Queen Victoria helped to revive the gem’s popularity. She wore and gave opals as gifts and since then, they have regained their rightful reputation as a desirable, beautiful gem.

Play-of-color in precious opals was a mystery for many years. However, when the electron microscope was invented, scientists found that this phenomenon was produced by tiny silica spheres and the voids between the spheres which bend light just like a diamond and produce all the spectral colors. The spheres are stacked in a structure that can produce many different patterns, and it is the size of those spheres and arrangements that cause the wide variety of color and patterns. 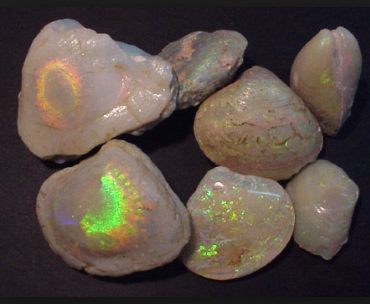 One characteristic of opals that is not always as appreciated is the ability to form as a psudomorph—taking on the outward appearance of the item they have replaced. Opals may form as fossils such as clam shells, snail shells and even bones. An opal sea shell is a sight to see! 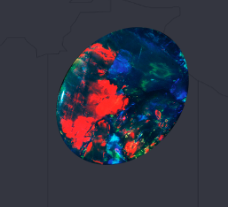 Black Opals are translucent to opaque, with play-of-color against black, grey, blue, green or brown body color. The rarest and most colorful of Black Opals are found in Lightning Ridge, Australia. A rare black opal. Photo courtesy Emil Weis. 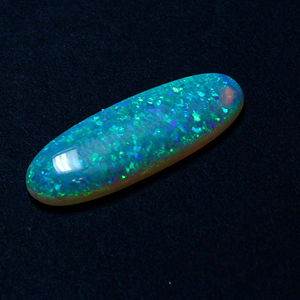 Crystal Opals are transparent to semi-transparent gems that have an essentially colorless body color. However, the colors we perceive are through the play-of-color phenomenon, described above. An important area for mining Crystal Opals is Australia's Coober Pedy—which, in the language of the Aborigines means “white man in a hole. In the movie Star Wars, Luke Skywalker’s underground home on Tatooine resembles the homes that opal miners live in when they work the opal fields of Coober Pedy. 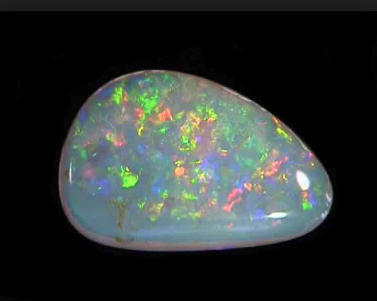 White Opals are translucent to semi-translucent, with play-of-color against a white background. Found in Australia and used extensively in commercial jewelry. This is the most familiar presentation of opals for many consumers. AWhite opal cabochon. Photo courtesy of Swiss Gem Shop. 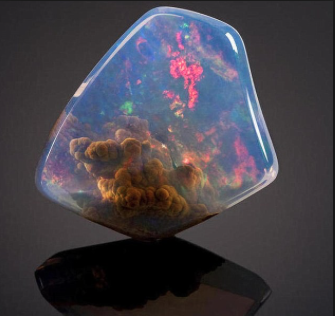 Contra-luz Opals are transparent opals that show play-of-color when light is reflected or transmitted through them. Many Mexican Opals show this characteristic. The words contra luz literally translates to “against the light.” This Contra-luz opal resembles a cosmic scene. Photo courtesy of Bonham’s. 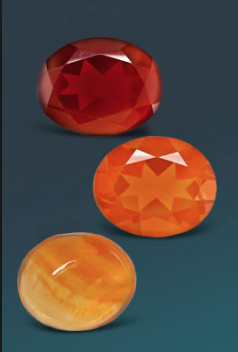 Fire Opals are a transparent to semi-transparent opal with a range of light yellow to deep orange body color. These gems may have play-of-color or none at all. Various colors of fire opal from Mexico. Photo courtesy of Royaldiadem. 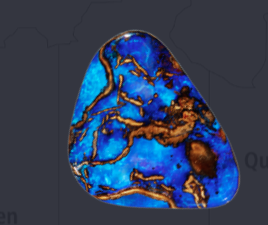 Boulder Opals are found in thin seams in the ironstone. Often gem cutters will cut out a seam and split it in two so you have mirror images of the pattern. Boulder Opals are a good alternative to the more expensive Black Opals which they sometimes resemble. Found in Queensland, Australia. An amazing boulder opal. Photo courtesy Emil Weis. 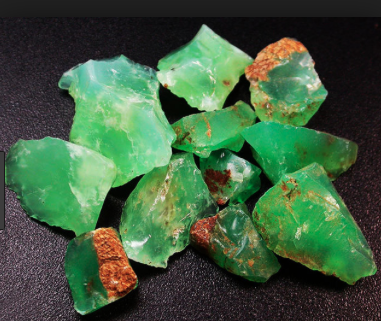 Green Opals, also called Prase Opals. The color is caused by nickel deposits and resembles jade and chrysoprase. These are rare and hard to find. The two most important sources of Green Opals are Tanzania and Serbia. Green opal, rough. Photo courtesy of Opal Auctions. 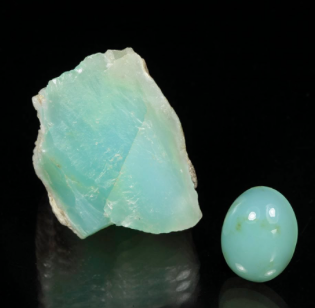 Blue Opals are relatively rare and most are mined at high elevations in the Andes Mountains in Peru. They are opaque to semi-translucent. Peruvian blue opal rough and cut cabochon. Photo courtesy of International Gem Society. 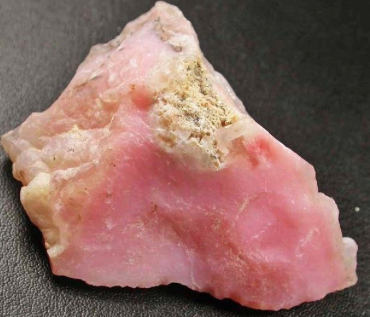 Pink Opals, also from Peru, are mostly opaque with a pleasing color. Their availability is waning. Pink opal, rough. Photo courtesy of Thepinsta. 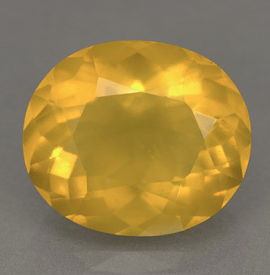 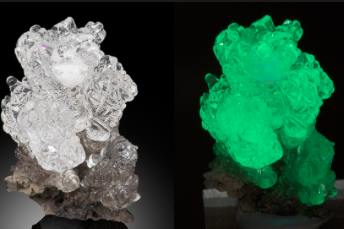 Hyalite Opals, also called water opals, are transparent to semi-transparent, and exhibit no play-of-color. They do fluoresce a bright green as seen above. Photo courtesy of Weinrich Minerals. 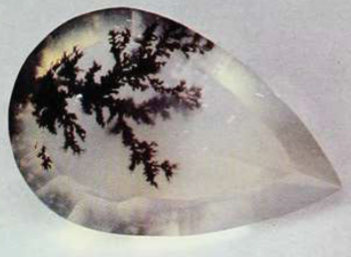 Moss Opals are opaque opals containing dendrite inclusions of other minerals that cause a fern-like presentation within the gem. Found in Idaho. Idaho moss opal. Photo courtesy of International Gem Society. 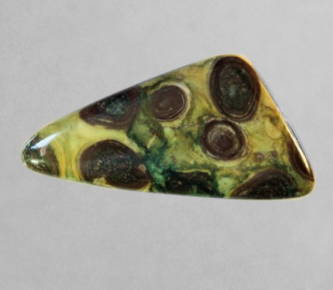 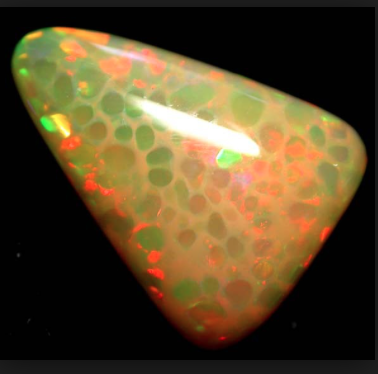 Hydrophane Opals appear as common opals when dry but develops play-of-color phenomena when immersed in liquid. In recent years, new opal finds in Welo, Ethiopia are producing a type of Hydophane Opal with a high water content. Hydrophane opal from the Welo area of Ethiopia, 7 carats. Photo courtesy of Opal Auctions.

Opals on the Calendar

Opals are the birthstone for the month of October and are also considered gifts to commemorate 14th anniversaries. 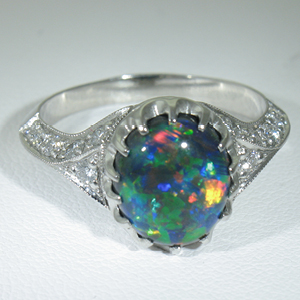 Black opal and platinum ring with diamonds, by Peter Indorf.

What is an Opal?

Opals are part of a mineral species with an amorphous structure composed of hydrated silica. The composition of opals is from 3% to 20% water. Within opals, tightly packed and arranged microscopic spheres of silica can cause play-of-color. That is, light reflecting off and passing through these spheres, frequently causes interference and diffraction of light, which we perceive as play-of-color. This phenomenon may be compared to rainbows, which form as light passes through water droplets in air. So while opals may be essentially colorless, they can still have play-of-color that is revealed as the gem catches the light.

Close up of the structure of an opal from Coober Pedy. Photo by Peter Indorf.

Opals are subjected to many kinds of treatments. Most are designed to “stabilize” the gem, deepen the color, or cause the play-of-color to stand out against a darker body color. Treatments include impregnation with oil, wax or plastic.

While not a treatment per se, opal doublets or triplets are thin slices of opal glued to a base material and covered with a thin dome of clear quartz. These gems are more resistant to scratching but are considered less valuable. They are attractive, modestly priced, and make beautiful jewelry. 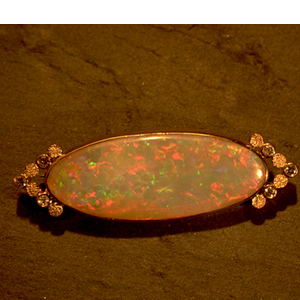 Collectors prize one-piece opals (without matrix or backing) that display strong play-of-color. They look for patterns such as “harlequin,” which shows a broad flash of colors when the gem or light source is moved or “pinfire,” which exhibits tiny flashes of multi-color patches. White Opals can also show these characteristics.

Contra-luz Opals are collected because of their relative rarity, and because of their dramatic reactions to light. And there is a growing appreciation for Boulder Opals, due to their strongly contrasting hues and play-of-color.

There are collectors of opal nodules from Yowah, an Australian locality. “Yowah nuts” are highly contrasting, large roundish opals which form within dark ironstone matrix.

Pink, blue and green opals are rare and therefore collectible as well. 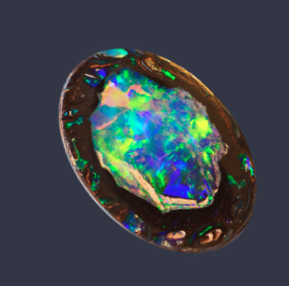 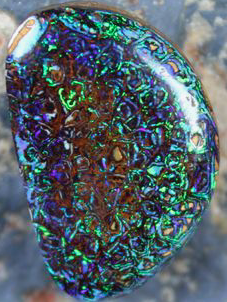 Australia produces well over half of the world’s opals, and some of the finest come from a locality called Lighting Ridge. Several other Australian localities—Coober Pedy, Anamooka, Yowah and Koroit—produce opals as well. Opals can also be found in the United States, Mexico, Brazil, Peru, Kenya Ethiopia and Indonesia.

The Care and Cutting of Opals

Because opals have varying degrees of water content, they are delicate — especially when subjected to heat, temperature changes, and changes in air pressure (such as in an airplane). Avoid wearing opals on the beach and diving into the cold water, as thermal shock may crack them.

Opals may develop a network of tiny fissures over time, or if subjected to heat or pressure. These fissures are referred to as “crazing” in the trade. Because opals are delicate, they require gentle, loving care in order to last a lifetime. 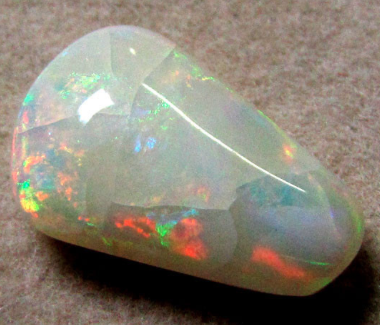 Example of a crazed opal. Photo courtesy of Opal Auctions.

Opals are rarely faceted because the facet edges and junctions are prone to abrasion. Most are cut en cabochon, which avoids abrasion along sharp edges. (Some Mexican, Peruvian and crystal opal are faceted and these tend to exhibit a sleepy, milky appearance on colorless or colored body color).

Cabochons are also an appropriate canvas upon which to best exhibit an opal’s play-of-color.

Dampened soft fabrics with no abrasive or chemical additives, or a soft bristle toothbrush doused with water are the best ways to clean opal jewelry. Some gemologists advise storing opal in a damp environment, or even submerged in water, to avoid crazing. 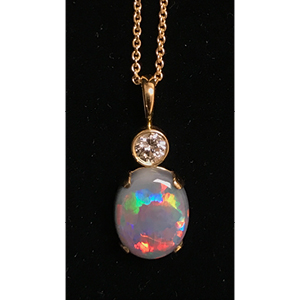 There is an amazing array of opals! If you wish to learn more, have any questions or aspire to own your own opal jewelry, let Peter Indorf Designs help. With worldwide resources, we can source the perfect opals at attractive prices. Contact peter@peterindorf.comtoday!