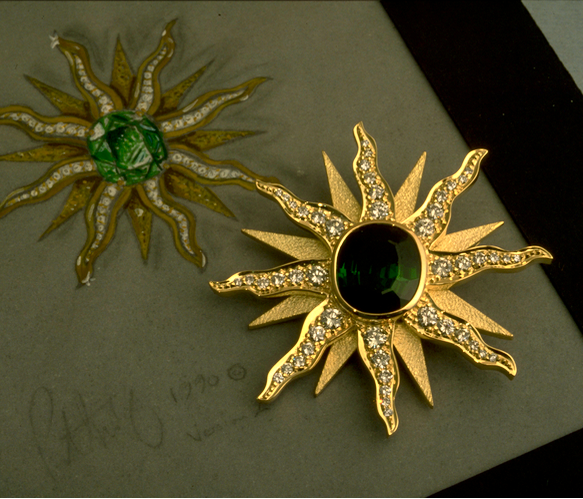 Researchers from the Gemological Institute of America Inc. report that “Somewhere in Brazil in the 1500s, a Spanish conquistador washed the dirt from a green tourmaline crystal and confused the vibrant gem with emerald. His confusion lived on until scientists recognized tourmaline as a distinct mineral species in the 1800s. The confusion about the stone’s identity is even reflected in its name, which comes from toramalli,which means mixed gemsin Sinhalese (a language of Sri Lanka). It’s a term Dutch merchants applied to the multicolored, water-worn pebbles that miners found in the gem gravels of Ceylon (now Sri Lanka).”

And,as the GIA explains, “It’s easy to understand why people so easily confuse tourmaline with other gems. Very few gems match tourmaline’s dazzling range of colors. From rich reds to pastel pinks and peach colors, intense emerald greens to vivid yellows and deep blues, the breadth of this gem’s color range is unrivalled….People have probably used tourmaline as a gem for centuries, but until the development of modern mineralogy, they identified it as some other stone (ruby, sapphire, emerald, and so forth) based on its coloring.” 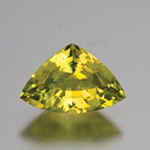 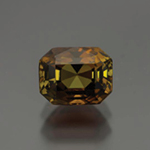 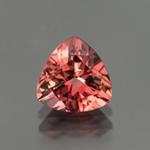 Other fine examples of Tourmaline can be found right here in the United States, where the gem was first discovered in Maine in the early 1800s, with additional deposits found in California soon after. Tourmaline became known as an American gem through the efforts of Tiffany gemologist George F. Kunz. He wrote about the tourmaline deposits of Maine and California and praised the stones they produced. By the early 1900s, these two states were the world's largest producers of gem tourmalines.

At that time,tourmaline’s biggest market was in China. Much of the pink and red tourmaline from San Diego County in California was shipped to China because the Chinese Dowager Empress Tz'u Hsi was especially fond of the color. There, craftsmen carved the tourmaline into snuff bottles and other pieces to be set in jewelry. San Diego County's famed tourmaline mines include the Tourmaline Queen, Tourmaline King, Stewart, Pala Chief, and Himalaya. 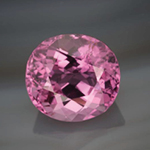 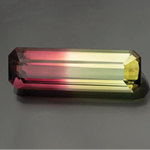 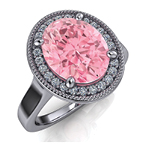 The miners became so dependent on Chinese trade that when the Chinese government collapsed in 1912, the US tourmaline trade also collapsed. The Himalaya mine stopped producing large volumes of gemstones all together, while other mines in San Diego County, like the Stewart Lithia mine at Pala, still produce sporadic supplies of gem-quality tourmaline.

Many of the photos you see here are from Pala International, which own a few tourmaline mines in in southern California. They have supplied Peter Indorf Jewelers with gems for many years.

The supply of tourmaline shifted during the first half of the twentieth century, when Brazil began to yield some large deposits. In the 1950s, additional finds appeared in countries around the world including Madagascar and Afghanistan. Additional Brazilian and African discoveries in the 1980s and 1990s reignited tourmaline’s appeal by bringing intense new hues to the marketplace. 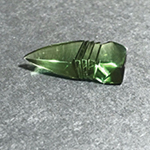 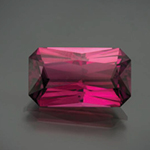 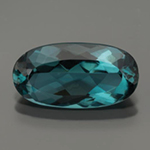 A tourmaline’s chemical composition directly influences its physical properties and is responsible for its color. Tourmalines make up a group of closely related mineral species that share the same crystal structure but have different chemical and physical properties. They share the elements silicon, aluminum, and boron, but contain a complex mixture of other elements such as sodium, lithium, calcium, magnesium, manganese, iron, chromium, vanadium, fluorine, and sometimes copper. Gemologists use a tourmaline’s properties and chemical composition to define its species. The major tourmaline species are elbaite, liddicoatite, dravite, uvite, and schorl. 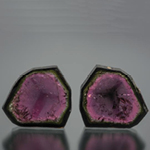 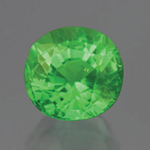 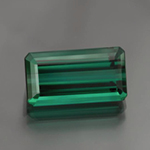 As a result of these varied compositions,tourmaline comes in a wide variety of exciting colors. In fact, it has one of the widest color ranges of any gem species, occurring in various shades of virtually every hue.

It is generally agreed that traces of iron, and possibly titanium, induce green and blue colors. Manganese produces reds and pinks, and possibly yellows. Some pink and yellow tourmalines might owe their hues to color centers caused by radiation, which can be natural or laboratory-induced.

Many tourmaline color varieties have inspired their own trade names: 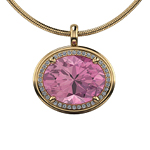 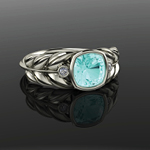 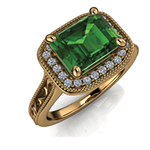 The Sasha pendant features a large pink tourmaline with a frame of diamonds; this Ruth ring has a cushion Paraiba tourmaline in a stylized leaf design; the Brennley ring, here set with an emerald cut green tourmaline and framed with diamonds.

Tourmaline becomes electrically charged when heated. When squeezed, it become piezoelectric. It was sometimes called the "Ceylonese Magnet" because it could attract and then repel hot ashes due to its pyroelectric properties.

Some tourmalines show a cat’s-eye effect called chatoyancy. Cat’s-eye tourmalines are most often green, blue, or pink, and like other cat’s-eyes gems, have to be cut as cabochons to bring out the special effect. 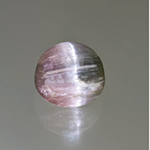 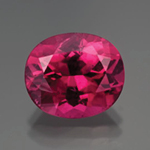 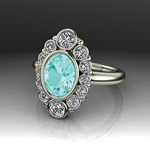 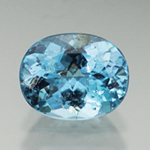 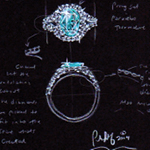 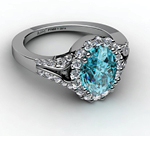 Neon Blue Tourmaline 2.68 ct from Madagascar; an original working sketch by Peter Indorf for the ring to the right.

Tourmalines not only show every hue of the rainbow, but also an incredible range of color saturations and tones—from affordable olive greens to expensive electric blues as shown above.

Tourmaline has been a staple of Peter Indorf Designs for many years, we love the color range and the fact you can buy American mined tourmaline. Allofthe designs and gemstones shown here and more are available. If you have questions or wish to add tourmaline to your collection or acquire an affordable beautiful gem, please get in touch.